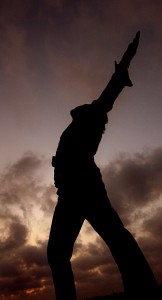 Aakash are Milestones minus the female lead (she went to finish her education in Canada apparently) and have instead recruited Ali Haider. The album kicks off with “Dilwale”, a song which is bound to be a sure-fire hit, since it is the type you’ll hear blaring out of the speakers at your local music shops in Pakistan. Besides this, it was also played to death by Ali Haider and the guys at every stage show around the country. “Dilwale” is followed by “Masti”, an up-tempo song, with “dancey” elements to it, and is the only up-lifting song on the album. “Chand Sa Mukhra”, on the hand is similar in style to “Dilwale”, and Aakash cleverly make good use of the Tabla (as with most of the tracks). These three songs are followed by “Koi Sapna” and “Yeh Raat”, the latter being the current chart topper. Incidentally “Koi Sapna” has a great guitar break that I’ve ever heard in along time – these guys thrive on emotion.

Side A is a little stronger than Side B, although B does have its moments too – like the fantastic “Tanhai” track, definitely my fav. off the album. The guitar and tabla fusion is a unique one, the lyrics are also outstanding, and the song has a certain Spanish/Latin feel to it. The track “Devta” has political overtones and “Sajda” (the Qawwali) sounds a little out of place in this album (probably that’s why it’s the last track).

Overall I think the album is worth it’s money, and Ali Haider’s voice feels very comfortable with these songs. They sound a lot like the Milestones they once were, but now the lead singer is allowed to have the centre stage instead of the music. I would like to have also congratulated the group on their individual efforts and the person who wrote the lyrics, but unfortunately no one is credited on the sleeve of the tape. The album is very mellow and will appeal to people who like listening to meaningful lyrics. But will someone tell Ali Haider to lose the designer stubble!