People are Comparing it to Purani Jeans 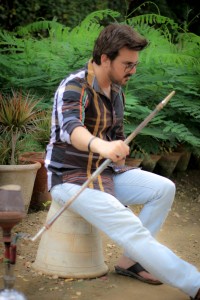 Fondly remembered for his pop anthem ‘Purani jeans’(Sandesa, 1993), Pakistani singer Ali Haider shocked fans in 2009 when heannounced on a TV show that he was giving up music. Now, as he returns with a new album titled Bachpan Ki Badami Yadein, he talks about his upcoming projects and the need to revive pop music.

After calling it quits, why did you decide to return to music?
I announced my retirement from pop music after my son’s death. For the past four years, I occupied myself with religious poetry and kalams (devotional songs). Alot of time has passed. People had been asking me when I’d come out withanother song like ‘Purani jeans’. This new album came to me all of a sudden. Iwas playing with my daughters and one of them asked me to narrate a story from my childhood. I started humming a tune and that’s how the entire concept took shape.

Tell us more about the album.
It’s a pop album. I want to bring back the era of pop because people miss it.There’s also a Sufi song for which I’ve collaborated with Persian artiste Maula Ali Jaanam. This is the first time I’ve sung in Persian. I’ve also attempted a semi-classical style of singing with another song in the album.

Nostalgia is a recurrent theme in most of your songs. Is that a conscious move on your part?
I am very attached to my memories. It’s human tendency to remember and relivethe time gone by, and I do that through my songs. I’m happy that the sentiments express resonate with those of my listeners. ‘Purani jeans’ was a blessing. Iwas still a teeny bopper when it achieved success. Now people are comparing this new song (the title track) to it. I don’t know whether the new album will be as successful, but I hope people connect to it.

A lot of Pakistani artistes have established themselves as playback singers and performers in India. We haven’t seen you much.

I’d love to sing for Hindi films if given a chance. But it surprises me that people in India know me and love my music because I haven’t performed many concerts or visited often.

What are the projects you are working on currently?
I will be going on an album promotion tour to the US and Canada soon. By September, I plan to release a new album — Purani Jeans Club Mix — with rearranged versions of my past hits.