I Don’t Mind Being Called a “One-hit Wonder 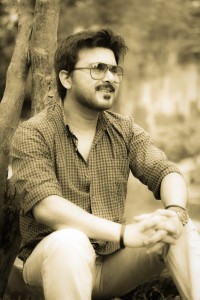 No. Ali Haider was not wearing ‘Purani‘ jeans when we did this shoot. But the Pakistani pop star, who had garnered a huge posse of fans with his popular number Purani Jeans in the late 1980s, is still almost as cute. Now, at 45, the corner of his eyes crinkle up when we tell him that, and we see that the once chubby-faced boy has grown up and is back after a long hiatus, “to his first love”.

Ali became a popular name after his song hit the charts. However, except for diligent fans, he slowly faded away when he could not recreate the magic. He had quit music after the demise of his son. Excerpts from an interview…

You have been called a ‘one-hit wonder’ after Purani Jeans by some, despite the fact that you have had many music albums since then.

Before Purani Jeans became a hit, if you would check the sales of my previous albums Chahat and Garar, and post Purani Jeans my albums Chand Sa Mukhra and Mahi, with the respective releasing companies, you will get the answer. But yes, Purani Jeans got so ageless that people call me a one-hit wonder and to tell you the truth, I really do not mind that.

You quit music in 2009 after your son’s demise. You’d been quoted as saying, ‘Music no longer satisfies me’.

Whatever I said then was true because that’s exactly what I was feeling at that point of time. That incident affected me so immensely that I could not even think about music, let alone sing. But now, with the grace of God and the prayers of my well-wishers, I have come out of that dark phase.

Tell us how Baba Bulleh Shah has influenced you.

When I was not doing music and was only reciting religious poetry, I discovered the poetry of Baba Bulleh Shah. This was the time when people had lots of questions about me not singing. At that point of time, I neither had the strength nor the answers to their questions, because I myself was in a quest. The poetry of Baba Bulleh Shah had the answers to my quest as well as people’s questions. So, his kalaams helped me rediscover myself, which gradually brought me back to music.

What have you been doing these years & a couple of devotional albums and we’d heard even fashion designing- you had your own label called ‘Qaraar’?

When I look back, I realise that time was a learning phase when I discovered a totally new side of me. When I was doing devotional readings and recitations, I discovered spirituality. It helped me heal myself and brought me back to where I am now. And yes, I was designing for my own label Qaraar, but now I am back to my first love, which is music.

For a musician, staying away from music is a tough decision. How did you deal with it?

I was able to deal with it because this decision was not imposed on me. When I was going through that dark phase, only devotional readings and recitations gave me peace, and now when I have come of that phase I am able to find peace and happiness through my music again.

Your daughters, are they critical of your work?

Yes, to an extent that any song they do not like, they instantly tell me to stop it.

You’d mentioned in an interview that your daughters watch Atif Aslam, who is insanely popular in India. What do you have to say about him and other Pakistani singers who are doing well in India?

Tell us about your latest pop album that has a dozen songs – ` Bachpan Ki Badaami Yaadein‘. Were you thinking of recreating the magic of your most popular pop number – ‘Purani Jeans‘, when singing for this new album?

It was on my daughters’ insistence that I made `Bachpan Ki Badami Yaadein‘ while playing with them, and it was on their insistence only that I went to the studio and recorded this song. So basically, they brought me back to music and hence I have dedicated this album to both of them. It is a pop album with seven new tracks…did after a gap of five years. The album is very simple and the tracks are narrative in nature…The whole album is a compilation of songs with different moods. The title track Bachpan Ki Badami Yaadein is perhaps every one’s story from childhood to high school. You just connect with the poetry right away and while listening to the track go down the memory lane of that phase of your life. Purani Jeans was not an overnight success but it attained a place in people’s heart with the passing of the time and similarly I feel that Bachpan Ki Badami Yaadein too doesn’t has a shelf life. Luckily people are already comparing this song with Purani Jeans so I am happy and honored…

You’ve sung in Persian for your new album, for the first time…

Yes I sang a Persian song Maula ali janam with the band called A Cube, and am planning to shoot the video soon. The band especially flew down to Pakistan for the recording. This song is a tribute to the great Hazrat Ali, and interestingly, everyone who worked on this track has the name Ali too.

Every style of singing is a different learning experience. Jaanay do is a semi-classical track and it reflects a more mature side of my personality. We have done the video of this song as well and that too is very subtle as we shot it at an old railway station.