At a first glance, Ali Haider does not look like a party animal. Not very tall, with an innocent, chubby look about him, dressed in black jeans and straight silver jacket, he looks like the typical seedha saadha nice guy who your mother won’t worry about you hanging out with. Naw … guess again. 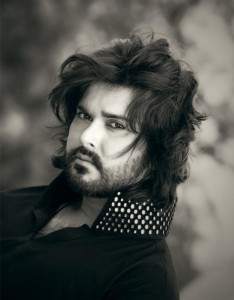 The lobby of the Four Points Dallas Sheraton Hotel is quite dim, but as he walks out the elevator he is wearing dark shades! Fakhar, who is sitting next to me on the sofa laughs and says to him, “Mujhe pata hai yeh kyoon pehni hai toonay, pehnay reh, pehnay reh.” Quite confused, innocent little me asks if someone gave him a black eye. “Nooo yaar” Fakhar says, “Its because we’ve been having such late nights na!” Ali Haider and late nights? There must be some mistake! But no, Ali Haider laughs and tells me that, “Itnee ziyada traveling kar kar key, upar se sonay ke bajaye saari raat doston ke saath partying mein guzaree.” As he’s telling me I’m thinking this doesn’t sound right, his voice is so soft and polite that it does not go with what he is saying. But Ali Haider is the first to admit that people really really misjudge him. “Even in my bachpana I was very quiet,” he explains, “Everyone would say yaar, yeh kitna seedha bacha hai. And this happens today too.” As for Ali himself, he believes he has a “dual” personality. “It depends on my mood,” he explains: “Sometimes I am very sober but other times mujhse zyaada shararti, logon ko tang karnay waala, mazaak karnay waala nahin hota.”

Though involved in the social scene, when I ask him who is his best friend, he tells me its his cassette player! And why is that? “When I’m in a really good mood, or even in a really bad mood, I take my cassette player, and whatever I write, whatever my feelings are, I record them. Mein cassette player se baat karta hoon, aur meri bohot si baatein aisi hain, jo shayad kabhi kissi ko sunnay mein aayein to woh bohot hunsain ge. The things I can’t say to anyone, those are the things I say to my cassette player.”

While talking to him, I tell him that he seems a lot like the character he played in the play “Tum Se Kehna Tha”, soft-spoken but but mischievious. “Actually,” he affirms, “the role I played, you can say was my everyday role in real life.” The play was Saira Kazmi’s, a good friend of Ali’s whose advice to him was “Buss tum jo ho na, tum uss tarha ka role karo, kuch aur karnay ki zaroorat nahin hai.” After rejecting some other offers he had gotten for acting, not only Saira, but Marina Khan, another good friend who was cast opposite him convinced him to accept the role. Based on the American movie “While You Were Sleeping”, Ali played the part of the younger brother. About acting in it, he says he had a lot of fun. “But after the play,” he says shaking his head in wonderment, “I got so many offers for films and plays, many many people offered. I don’t plan to do any movies, but after that play, once in a while I do plan to do some others.”

Recently, though, he has been working closely with MagnaSound India, with whom he has a two year contract. The same company who released Colonial Cousins and Alisha Chinoy have already had him shoot a video in Bombay called “Chand Sa Mukhra” directed by Ken Ghosh, one of the best Indian directors. With MagnaSound, he has gotten quite a lot of coverage as the video premiered on MTV, Channel V, and Zee TV on April 14th.

His last album with his new group Aakash was very successful. “That was the first time, I joined with a band, Milestones it was, and I did an album with them” he explains. So, will he do any thing drastically different on his new album? “My new album will be a little bit experimental but it will be commercial.” Laughing, he says, “Mein itna ziyada bhi experiment nahin karna chahta ke chay (6) mahinay lug jayain logon ko samajhney mein!”

The best reward for Ali is when people take pleasure from his music. This is why he really enjoys the concerts where “people appreciate those same songs that are a hit in Pakistan.” He likes the U.S. since its his third time here, and “fans already bun chukay hain.” But if you ask where he loves performing, always a diplomat, he mentions all the places he has performed. When I tell him to be less abstract, he admits Pakistan definitely tops his list: “Jo apni jaga hoti hai usski to baat hi kuch aur hoti hai. Pakistan mein, kyoonke woh apni jaga hai, wahaan perform karnay mein bohot maza aata hai kyoonke wahaan ke loag apnay hain.” But, like Fakhar and Junaid, he too is in awe of the London crowd and had loads of fun performing there as well. Touring and performing in about 12 to 13 cities in the U.S., he says that “We get to meet a lot of different kind of people.” His surroundings really influence how he feels and he tells me that “At every stage, one song or another is on my mind. In San Francisco I was constantly singing Abida Parveen’s “Jub Se Toonay Mujhe Deewana Bana Rakha Hai” and my band members were like, kya problem hai tum ko, subha se shaam tak ye gaaiey ja rahay ho.” And what song does he have on his mind in boring old Dallas? “America is such a romantic place,” he responds, “and as I’m roaming around Dallas, and even when I was in Miami, “Zaalim Nazron Se” is constantly on my mind.”

It is hard to believe that such a nice, sensitive person that Ali Haider is, he was labeled as wajib-ul-qatal in Pakistan by the mullahs. Explaining the Aaraaf/Aakash controversy, he says, that “There is a part of the earth and its called Aaraaf. On that, there is Surat Al-Aaraaf too in the Quran. We named our group Aaraaf with the best of intentions because there are some spiritual songs in our album, Allah ki shaan mein. We thought of using a name which would be a bit different that pop singers don’t normally use, To mujhe “wajib-ul-qatal” qarar day diya tha.” The situation was so serious that the government had to provide security for him and he couldn’t step outside his house for four days. But Ali Haider makes it clear that “Though it is really easy to ban something in Pakistan, it’s not as if the whole of Pakistan is like this. There are a lot of good people in Pakistan, and that is why Pakistan still exists. A certain group of useless people who have nothing better to do raise opposition on songs such as ‘Billo’ and ‘Patang Baaz Sajna.'” But there are still a lot of people “who will appreciate the good things you have done” he adds.

It is no wonder then when he reveals his most frequently used quote: “Khud bhi zinda raho aur doosron ko bhi zinda rehnay do.” Explaining it, he says, “When we started doing our type of music about 10 or 12 years ago, we used to feel we didn’t have the freedom to do what we wanted haalankey hum kowi aisa kaam bhi kur rahay thay jiss pe logon ko sharmindagi ho. Lekin phir bhi, jitni baatein mainay aur Junaid nay, ya ye do teen naiay groups ne suni hain ke ‘Ye log chehron pe gaatay hain; ye besuray hain’ and I always used to think hum apna kaam kur rahay hain, tum apna kaam karo.” Today, as he looks at the improvement, he says, “Now, Mashallah, we have come to that position that people have accepted that these pop singers are also something.”

Well-established as a singer, his other hobbies are relaxing and hanging out with friends. After intensive studying at Karachi’s best schools; Habib Public School, Adamjee Science College, and N.E.D. University, he is “fed up of reading.” Instead, he says, “I love eating out, and watching movies.” Perhaps the only books that he does read, though, are those of poetry, namely those by Ahmad Faraz and Parveen Shakir, his two favorite poets. An admirer of both, he says, “Ahmad Faraz ko mein bohot pasand karta hoon aur Parveen Shakir ki bhi kya baat hai.” Any particular shair that he likes? He recites one by Faiz Ahmed Faiz, “Gulon mein rung bharay, baad-e-nau bahaar chalay, Chalay bhi aao ke gulshan ka karobar chalay.”

The lyrics for his songs, he writes mainly himself and although he does not play any instruments, he enjoys making melody lines. One of his most famous songs, “Purani Jeans” was written by him and he says, “It was actually my own story. In Pakistan, most of the songs made before it, were mainly about love m. Even in my own albums. Then, I thought a song should be made which was a bit different. That was ‘Purani Jeans'” Wow, I marvel, then ask the question I have been dying to know the answer to, who is “R” in that song when he sings, “Woh likhna haathon pe, A + R.” Laughing, he tells me that was a real person, “bachpan ki yaadein , ghaltion mein shaamil” and of course he won’t tell me the name, but my curiosity is satisfied it is a real person, and every time she hears that song, she knows it is her!

At this time, Ali Haider has to leave, and he apologizes to me for not giving me enough time. What a gentleman! I think. First of all, to give me this interview, he made all his band members wait, as they were supposed to leave about 15 minutes ago, and now he is apologizing to me! But I tell him he’s a cool dude cuz he’s from Karachi, my city. Much to the annoyance of Ali Tim, his band member, who is motioning him to hurry up from across the lobby, Ali Haider stalls when I tell him I’m from Karachi. “Tum Karachi se ho. Wah,” he sighs, “Karachi ki kya baat hai.” I couldn’t have said it better myself!
Asma Ahmad
April, 1997