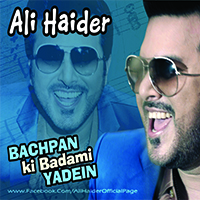 Pakistani singer Ali Haider who ruled the 90’s era with hits like Purani Jeans- which was launched in 1980’s but till date remains popular among college students, had won several hearts and had huge fan following then. After a hiatus from main-stream music industry, he is back with ‘Bachpan Ki Badami Yadein’ on Artist Aloud. The album is a compilation of songs with different moods.

The talented musician who has been famous for various hits from the 90s like Purani Jeans, Qarar and Chahat has produced more than 16albums till date. Besides singing, he has acted in numerous TV serials. After departing from music in 2009, Haider has become a Sana khawan, and has released three religious albums, Mola Dil Badal Day, Shor Hai Mehshar Ka and Tuluh EFikr.

In a conversation with Radioandmusic.com, Pakistani–basedsinger has a candid talk about his break in music, new album ‘Bachpan Ki BadamiYadein’ and future plans.

Why did you decide to come up with ‘Bachpan Ki Badami Yadein’?

I received messages from my fans all over the world,requesting me to produce music and that has got me here. Finally, all the lovefrom my fans has helped me create the album ‘Bachpan Ki Badami Yadein’. I have done this album with Artist Aloud as the world is going digital and the music I have given is my genre and signature style. There are people who still relateme to ‘Purani Jeans’, so I have got something exciting for the youth again thistime. All the fans who have waited so long, this is for them. The album willremind you of your childhood days. Everyone during their childhood have beennaughty. This is my come-back album.

Who was your inspiration for the album?

I have made this song because of my daughter as I am used toplaying around with her.  This is how the album was developed. Definitely,it’s my daughter who is the inspiration because of whom I made this album.

Can we compare it with Purani Jeans?

I am unsure if the new album will get me fame again as Purani Jeans did but the style is the same. It is a great honour for me as asinger that people are already comparing the song with Purani Jeans and Qarar and tracks from these are still played in colleges becoming part of many farewell and college lives.I will admit that I am unsure if this album will reach that heights but it has same style. Now-a-days, film music is the trend. Many people tell me that the works of independent musicians are not prominent so I think my new track‘Bachpan Ki Badami Yadein’ will refresh the old days. There was a style of pop music during my Purani Jeans times and now this album will revive the memoriesof the great time of pop music.

Badam(Almond) is sweet and at times you get some Badam not so sweet. And child-hoodis like this. Ears pulled by father, fighting in school and principal’s punishment are all fond memories of childhood which reflect in my album. I wishto speak to children through my album but in a matured way. The title of the album came out naturally and was not at all intentional. Everyone is enjoying the title more.

You have delivered so many albums which one is your special one?

All the albums are my babies and are close to my heart. Sandesa is close and special asit bought me fame and the songs of the album have touched many hearts and have fond memories. Most international tours I did were because of it and till date people remember me for it. After so long, this album has got my spark and a fresh music. For four to five years, I was not doing music at all. I am one of those artistes who want my work to click before I give it out.

Why had you been doing religious music more and had taken a break from your signature music?

After myson (had passed away), I was completely out of pop music for a very long time.I was unable to do it at all. There is no point of discussing about it; I havemoved out it now for my fans, well-wishers, family and most importantly formyself. My heart told me that I have to do this music; somewhere I had leftbehind and here I am. Last few years, was a journey for me and memories arethere from the journey but prayers of my fan have bought me back. A while back,I never thought I can do this kind of music. Thanks to my fans anddaughter  Alizeh.

When you’reunwell you take different medicines in my case religious music played an important role. In my case, the trouble in my life is that I need a bit peace and there was a time when people misquoted me and I was not in a stage that Icould revert back to them. I didn’t give too many interviews and was away from public eye. That time, I used to read religious poems.

I am doingpop music now but that doesn’t mean I have given up my religious music. As an artiste, I never touched that area (Sufi music) but after the incident, Is tarted learning and singing Sufi music and now I have became a complete artiste. I am thankful to God for it. I did lot of music but never did Sufi music and I couldn’t relate to Sufi music then. But now, I have done Sufi albums and other works like poems which needs special strength.  I went through difficult times because God wanted me to understand and learn Sufi music. I am completely energetic now and am back with new styles. I don’t want to think about bad things in my life. I wish to remain happy (he laughs).

Could you tell us about  ‘Maula Ali Janam’-  the Sufi track you have added in the album?

This trackis also a chapter of my difficult time. When I started religious music and read lot of poems without music. That time I came across the music of Baba Bulleh Shah and I did an album. I had composed the music on my own for the religious album and because of that album today I am able to complete ‘Bachpan Ki Badami Yadein’. Music was completely out of me. There was a time when I felt that I will never sing. Then I started that album and it took me one year to complete.Moula Dil Badal De music played an important role to discover me and bring me back. This album in 2009 was a huge success.

What is next after the album?

Right now,I am here in India to do the video for the album’s title track ‘Bachpan KiBadami Yadein’. When I was performing for the video I realized that I am theAli Haider who was there in Purani Jeans and Qarar. It took almost seven-eight months to complete the album.

According to you how is Indian music industry?

Indianfilm music has delivered remarkable work. A talented individual can listen toIndian music and learn; that is the power of Indian music.

But I amvery sorry to say the competition that exists now-a-days is not good for music.India has set a new trend of producing bold songs but music is not to make people dance and jump. Its time that they should come-out of it and create some good music. It is a bit boring now. Other than this Indian film industry is good. India films are in leading position now so they should stop this and move ahead with new music. It is like child play.

Music isnot to win a war but it is to win hearts of people.