The heartthrob of pop, Ali Haider is back with his brand new album Purani Jeans 2. The album features two peppy/dancy versions of his famous and the most unforgettable track Purani Jeans.
Get set to take a trip down the memory lanes… 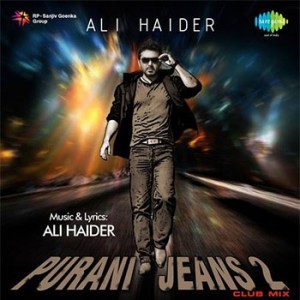 The name Ali Haider is synonymous to ‘Purani Jeans Aur Guitar’. And so with the overwhelming requests of all his fans through out the world, the Pakistani singer is all set with his latest album, Purani Jeans 2. The album includes nine tracks covering different styles of music and hence catering to all kinds of listeners.

There are various romantic numbers, like Main Tumhara Hamesha, Neeli Shirt, and Diljala, all with a different mood and feel to them, and for all his ardent fans who have been listening to his music since the beginning of his career, there are also mixes of his classic hits, Qarar and Dil Ki Baatein.

And finally with the never-ending demand of his youth anthem, Ali has come up with two versions of Purani Jeans after a gap of more than two decades, a Club-Mix by Dj Akash Rohira, and a rock version of it as well, both of which are full of energy and take your spirits to different levels.

Note to his fans: “I don’t mind being called a one hit wonder, and with this album I just want to show my appreciation and gratitude to all my fans and loved ones who have been there with me and for me at all times, and are the reason that I am where I am today”.