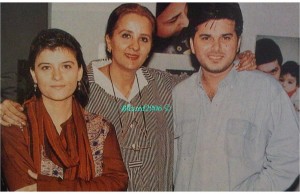 This is back when Ali Haider’s album Qarar was all the rage and Marina Khan’s goofy antics on-screen were bearable. These two came together for this drama serial based on the Sandra Bullock cutesy movie “While you were sleeping” and directed by Sahira Kazmi. A light-hearted serial that wasn’t trying too hard, Haider’s acting is pretty decent. Besides these two there was Farhan Ali Agha (he is in a coma in the entire serial), Salma Kanwal (a stage actress who was struggling to make into TV and is now seen in Yeh Zindagi and Kash mein Teri Beti Na Hoti), Manzoor Qureshi (a handsome leading actor back in the 1960s but now seen in fatherly roles such as Mora Piya), Badar Khalil (does she need any intro) and Seemi Pasha (then one of the top models).