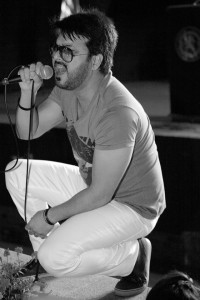 Ali Haider is a Pakistani Singer and Actor. He grew up in the neighborhood of Firdous Colony in Karachi, and was pursuing a …degree in engineering at NED University when his showbiz career began.He has had numerous hits in the early 90s such as Purani Jeans, Qarar, Chahat. He also had a big hit later in the 1990s with Chand Sa Mukhra. Since the 1990s, Ali Haider has produced over seventeen music albums of which dozens of songs were top hits and became very popular. These earned him a place among the top singers of Pakistan.His first album was Jane Jan Sun which included the title songs of jawaniyan, and Dhoop Kinare sung along with Nayyara Noor. This album was released by EMI and is obsolete in market; however, it may be found in some collections. The 2nd album he released was titled “Chahat”, the music of which was given by Bunny and had a song with Sadaf Munir (now Sadaf Iqbal). That album was purchased by HMV India. Two of the most popular songs from the album were “Chahat” and “Ajnabi”.With the moderate success of his second album, he released his third album, titled Qarar, which was much better than his previous two albums. It consisted of songs such as Qarar (the title song), Shehnahee and Jadu Kiya, which went on to become top hits. Amir khan, Bunny and Ali Haider himself, composed the music of this album. As Haider improved so did his music, his fourth album, Sandesa produced the hit songs Purani Jeans and Sandesa, which went to the top of the charts and remained at the top for a number of weeks.

His next album, Pakola Album did moderately well with songs such as Zaalim Nazron Say and Laila making it into the charts. His sixth album, Dastaan is known to be the best album Haider has produced since his career started. It shot straight to number one and brought him great popularity at that time. In this album he produced a variety of music genres that suited pretty much anyone. The songs responsible for his popularity were Walawai, Papa Mummi and Ranjha Heer.

After some time, Haider released the album “The Best of Ali Haider”, which pretty much summoned up that he is ending his music career. The album included all his major hits and favorite songs he had produced in the past. Some of the songs included in this collection were Purani Jeans, Walawai, Qarar and Sandesa.

After a gap of three years Haider released two more albums Mahi and Saaiyan, which along with some new tracks also included the remix versions of his classic hits, Purani Jeans and Qarar.

The two experiments that he did in the course of his career were his debut film, Chalo Ishq Laraein, and his first trance album, Jadu. Jadu was released before its time. At that time, trance music was relatively new in UK, it wasn’t there in India and it wasn’t in Pakistan at all. No one had done trance music in Urdu and it was a big jump from ‘Saiyaan’ and ‘Mahi’, plus the video was very bold too.

So with a very mediocre response from Jadu, the grapevine got that he was at the crossroad of his musical career, but he proved everyone wrong one more time by giving his hit single Chandni Raatein, which was an instant hit among the masses. Even his next album, Tera Naam Liya Tou was a huge success in Pakistan and especially UK, and made it to the number one spot on BBC Asia. His whole tour was a hit because of its title track.

Besides singing, he has acted in numerous TV serials on PTV. Among the successful dramas was Chand Sa Mukhra, which used his hit song as the theme music. He also sang the theme music for the serial Chandni Raatein. He is currently working on the sitcom titled, “eik aur eik dhai”, besides acting in this romantic comedy; he has even composed and sung the title track of it.

Haider released his 15th Album in 2007 titled “Jaaney Do”, which had a semi-classical feel in most of its tracks and reflected a more mature side of his singing and personality.

For personal reasons Haider took a hiatus from music in 2009 and became a Sanah khuwan. During this time he did not use music at any level to express himself and rather released various religious albums in the course of the next three years, and conveyed his then state of mind only through reading and reciting, which helped him realize his spiritual side.

But after taking a three years gap from music he returned with his album “Kee Jana Main Kuan”, which was released in the year 2012 by EMI music India. It was like his come back music album focusing on the sayings and poetry of Sufi saints like Baba Bulley shah and Sultan Bahu to name a few.

And hoping to revive the dying pop genre again, he once more started composing songs, which have meaning, love and compassion and released his last album in early 2013 titled, “Bachpan Ki Badami Yadein”. In true form this album was his come back album, his return to his first love, which is music. Each and every song in this album is very distinctive and narrative (a true Ali Haider style) in nature. He dedicated this album to both his daughters who he considers the sole reason for his return to music.

Recently he hosted a very unique show called “ya raheem ya rehmaan” for abb takk channel in Pakistan. This ramzaan special series became an instant hit for its exceptional format and for the way he explained the various aspects of Islam and humanity. Another distinct thing about this show was the live qawwallis that he performed with pakistan’s famous qawwal troup, Taji Brothers at the end of every episode.

He doesn’t mind being called the ‘one hit wonder’ and totally believes that whatever he has achieved in his musical career it is mainly because of his super hit track ‘purani jeans’, which is like a youth anthem across Pakistan and India and with the South Asian expatriates around the world. And so owing it all to all his fans and with the ever-popular demand of this track he is all set to revisit purani jeans one more time and is releasing an all-together different version of it in collaboration with a famous Kolkata based DJ, akash rohira. The track is a club-mix and comes along with a very funky video. The album is being released by HMV saregama India, the same company that released purani jeans for the first time way back in 1993.

Haider doesn’t want to get mixed up with what people say, rather just wants his work to speak for him. He says, “I am an artist, a singer and a performer and all that I am, I am because god has given me this gift and talent, which gives me the opportunity to bring in some peace and happiness in the lives of my listeners, be that be through my music or devotional poetry”. And so with this sole thought in his mind he has decided to do both popular music and religious poetry simultaneously and hopes to reach out to all his fans just through his voice.