Ali Haider, the ‘Purani Jeans’ Singer, is back with an album on a more innocent time 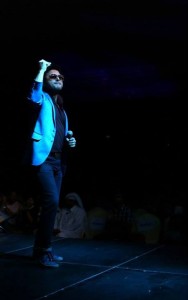 That song from Ali Haider’s 1993 album Sandesa, capturing at once a coming of age and loss of innocence, has for years remained an anthem for college functions, playing on loop in days when audio casse…ttes were still the medium. It’s been two decades, and Ali Haider — the voice in 16 albums — continues to be known for that one song. In 2009, after the passing away of his son, Haider announced a break from singing. Now, he’s out with Bachpan ki Badami Yadein, released digitally on Artist Aloud.

Haider had, in fact, released an album last year, a sufi album called Ki Jaana Main Kaun. But Bachpan ki Badami Yaadein is what he calls his comeback. After sticking to the ‘been there, done that, not doing that again’ plan for long, Haider aims to re-capture the spirit that drove “Purani jeans”, “his signature style” that he says made him famous in India, Pakistan and elsewhere.

“I’m having to compete against my own song. It’s a funny situation…” he laughs, speaking on the phone from Mumbai.

“People here know me because of “Purani jeans aur guitar”. Purani jeans was a college story. This is a story of childhood, be it mine or that of everyone. People who have been listening to it are comparing it to “Purani jeans” even now, which is quite an honour for me. This is again a real story; whatever I go through I take it to people through songs. The interesting thing is, whatever my experiences are, they end up touching others because they’re real…”

The video, shot by Shurobi Menon, is already up on artistaloud.com, and Haider seems happy.

“Hats off to her. In an era where there’s so much dance and skin show, things that are considered essential to a music video’s success, she’s attempted to make a video that brings in family values and our culture. She’s shown that it’s possible to present a song without all that.”

The album comprises seven tracks; besides “Bachpan ke badami yadein”, there’s “Maula Ali Janam” (a Sufi track reworked with pop accents), “Election” (“within ourselves, in the course of our daily lives, be it in love or relationships, there are occasions when one has to choose”), “Chand se” (a love song), “Panga” (on the angst of the common man that expresses itself when provoked), “Kunwara” (a song re-worked from one of his previous albums), and “Jaaney do” (based on Anwar Maqsood’s poetry).

The four-year break from popular music, Haider says, did him good.

“After my son’s death I had gone away from all uchhal-kood. For a long time I was singing only religious poetry. For a singer it’s essential that one has sung not just pop. I can now sing a bit of semi-classical, I’ve been rendering the kalams of Baba Bulleshah, Sultan Bahu and Josh Malihabadi. There’s been a change, a maturity, in my personality. I think these 4-5 years I’ve lost something but also gained a lot. I’m grateful to the almighty, I’m grateful to my fans, my friends who, even during my absence, have been praying for me, and that’s why I’ve been given the gift of Bachpan ki Badami Yaadein. After “Purani jeans” I’ve never tried to make a song like that. Though people have kept telling me that it’s because of “Purani jeans” that I’m famous and that I should make more songs like that, I’ve been saying that was one phase and I’ve got it from God. I’ve never sat down to do the same thing again.”
Courtesy : The HINDU
By. Shalini Shah
10th, April,2013